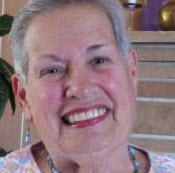 For AADC members who may have missed an earlier announcement, we have lost one of our most cherished members, Millee Livingston. She passed peacefully at Mercy Hospital, San Juan, on Friday, September 9, just days before her 92nd birthday.

Millee was an active member of AADC since 2004 and served as the vice president for a year during the club’s early years. She would always volunteer to help the club with fundraising, in particular she was known for raising hundreds of dollars each year with raffle tickets for a $50 lei at our annual fundraiser. The club is considering arranging a scholarship in her name to continue her legacy of promoting peace and justice.

Millee was someone who walked the walk and talked the talk. She was the founder of Auburn’s first Peace Camps in the 1980’s, as a member of the Women’s International League for Peace and Freedom.

She was one of the founders of the Martin Luther King Jr. Community Celebration, where she was a participant and again helped raise money from various groups and individuals to fund the event.

She was one of the founding members of the Gathering Inn, serving meals and providing shelter to the unhoused through Sierra Foothills Unitarian Universalists, where she was an active member since 2002, serving for years on their Social Action/Justice Committee.

Millee was also a founding member of Auburn Indivisible, organizing the first meeting with fellow AADC members Mark Rosen and Leslye Janusz, at which about 50 showed up.

Millee’s wishes were to be buried near her family at the Mt. Lebanon Cemetery outside of Philadelphia. Her remaining family all live in Philadelphia, New York, Boston, New Jersey and Connecticut.

A Celebration of Life for Millee will be held in Auburn on November 12, at the Sierra Foothills Unitarian Universalists, 190 Finley Ave, at 2:00 p.m.  The Celebration of Life will also be available on Zoom for those who want to participate online. More information will be forthcoming as it gets closer to the date.